THERE’S SCIENCE IN THE SETTING SUN (5-5): Earth Shadow & the Belt of Venus. 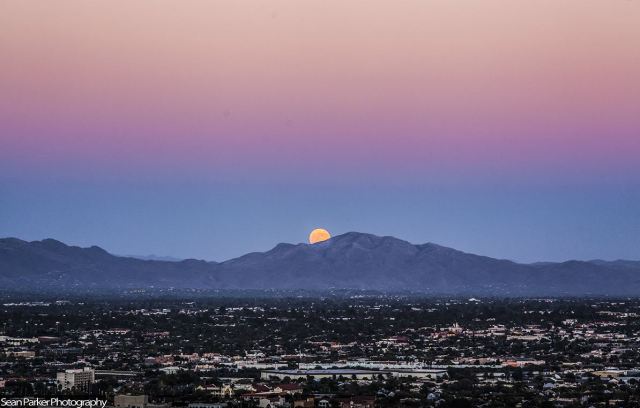 Image Credit & Copyright:  Sean Parker of http://www.sean-parker.com/.  CLICK image for larger view and look below for information and links.

This is the last post in the “Science in the Setting Sun” series and those that know me know that this phenomenon is one of my very favorite of them all, especially during times of the Full Moon.  It’s called, “Earth Shadow and the Belt of Venus” and it’s a tri-tone masterpiece in the evening sky during sunset and in the morning sky at sunrise.

Everyone loves sunsets; that beautiful life giving star dropping below the horizon as the Earth rotates us away from it for the night.  The sky, clouds and even the Sun itself transitions from yellow mid-frequency visible light to lower frequency orange and red.  It’s truly a science lesson in and of itself displayed in the form of color on the sky.

But……have you ever taken a moment, as the sun has fallen below the western horizon, to turn around and see what’s taking place behind you in the east?  If you’re lucky and have a large open horizon you may see a dark gray layer in the sky that stretches across the land in a long arc.  Directly above that gray you will see a pinkish-orange layer covering it and above that, the light blue daytime sky.  That gray layer is the actual shadow of the Earth cast upon the sky in the east as the Sun sets in the west and it’s vast.  If you are on top of a mountain or at the beach and have a wide open horizon you may have to actually turn your head to see the entire shadow as it arcs with the arc of the Earth itself.

That pink-orange layer above the Earth’s shadow is an anti-twilight arch called the “Belt of Venus” and it’s due to the scattering of sunlight interacting with the blue of the sky just above.

Watch for a while as the Sun gets further and further below the horizon, the Earth Shadow and Belt of Venus rise higher and higher into the twilight sky until night consumes them both.

Two points to make; first I want to remind you that even though were talking about sunset this phenomenon just as readily takes place during sunrise.  As the Sun rises in the east, the Earth Shadow and Belt of Venus will appear in the western sky and gradually get lower and lower until it reaches the horizon to begin the day.

The second point I want to emphasize is that if you really want a treat go see this phenomenon during the Full Moon phase.  As the Full Moon is a form of opposition you will be able to see the yellow/orange full lunar disk nested firmly within the color layers.  Sometimes, depending on the time of year and your location on Earth, the Sun will be on one horizon while the Full Moon is on the other.  Every time I see that (you need two clear open horizons obviously) I have to take pause and really appreciate what I’m looking at.  I look to the Moon and think “That 2160 mile wide rock over there 240,000 miles away and created by something the size of Mars impacting Earth is being illuminated by that 865,000 mile wide fusion reactor over there, 93,000,000 miles away in that direction.”

When you actually stand there and can turn your head from side to side and literally see them both on opposite horizons and understand what’s going on it’s an amazing lesson in perspective.

Classical Astronomy page on Earth’s Shadow and the Belt of Venus: http://www.classicalastronomy.com/news/anmviewer.asp?a=321&z=22

2 Responses to THERE’S SCIENCE IN THE SETTING SUN (5-5): Earth Shadow & the Belt of Venus.