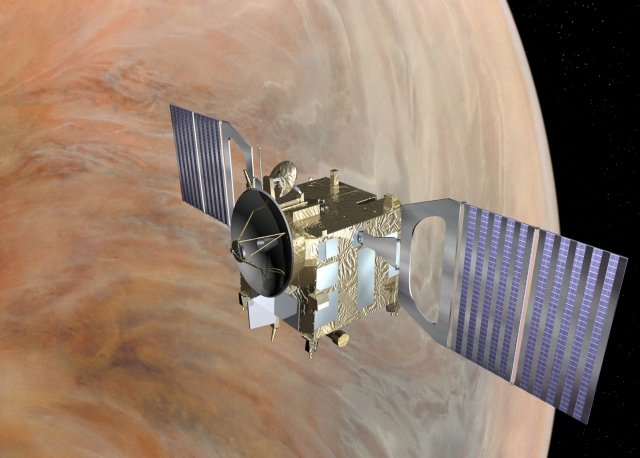 Many of you may know that the European Space Agency’s, Venus Express wrapped up its primary scientific mission on May 15, 2014.  On top of that, its fuel stores aren’t going to last much longer.  So what do you do when you have a low fuel spacecraft with no mission?  You take some risks in hopes of doing more science!

That’s just what Venus Express did through the end of May and beginning weeks of July.  The spacecraft was allowed to, through the help of gravity drop orbit and “surf” between 131 (81.4 mi) and 135 km (83.8 mi).  At its lowest altitude and with the help of a small few thrusters, Venus Express got down to 129 km (80.1 mi) from the Venetian surface.  Just to give you some perspective, that’s about one-third of the height of the ISS.  In 1963 Joe Walker and his X-15 (Flight 91) reached almost 70 miles in altitude.  Let’s not forget to mention the un-survivable pressures and temperatures that Venus boasts, though they are greatly reduced at those heights.  The solar panel sensors did read over 100 c (212 f) degrees even still.

Currently as of July 11, 2014 Venus Express began a 15 day climb back to a higher orbit of 460 km (285.8 mi) however as I mentioned, the fuel onboard is an unknown and once it runs dry, gravity will help the spacecraft will make one final approach to the Venetian surface where it will rest in pieces.

I found this daring attempt to gain some scientific data fascinating and well worth the risk and I applaud ESA for such a terrific mission overall.  It’s always bitter sweet to see a mission come to an end.