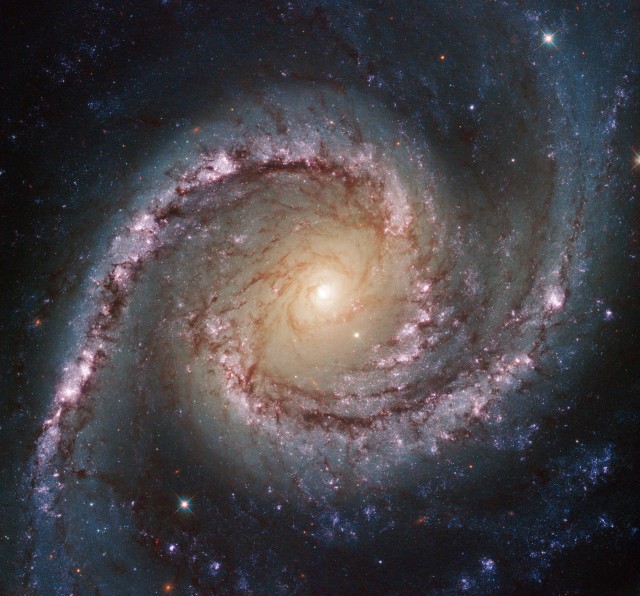 60 million light years away in the southern constellation Dorado, is the galaxy cataloged as NGC 1566. Many things about this galaxy are classical and easy to determine and understand as certain traits are seen in many galaxies throughout the universe. The pink hue of violent star formation dominates the galaxy and by the looks of it there’s plenty of gas and dust in those lanes to sustain it for a while. Along the outskirts are the beautiful blues of young and main sequence stars and of course, at the core lie the yellow ancient stars that have likely been there since the formation of the galaxy or shortly thereafter.

One thing you don’t see in this galaxy however is a classic spiral nucleus and it’s clearly lacking the bar structure that you’d expect to see in a galaxy of this shape. That’s why this galaxy has been cataloged as an intermediate galaxy.

This galaxy is also known as a Seyfert galaxy which are galaxies with active nuclei. This means that its nucleus it’s emitting massive amounts of electromagnetic radiation. When viewed with Hubble or any optical telescope it’s not noticeable but when viewed in different wavelengths the nucleus is much brighter than one would expect. Along with quasars, Seyfert galaxies are the two most active galaxies known. The reason lies at the core in the form of a feeding supermassive black hole whose accretion disk emits massive amounts of electromagnetic radiation.

WHAT IS IT?: Intermediate spiral galaxy.

HOW FAR AWAY IS IT?: Roughly 60 million light years.

WHERE IS IT? (General): Southern constellation Dorado (The Dolphinfish) and largest member of the Dorado group of Galaxies.