LET THE COMET HUNT BEGIN! (If You Haven’t Already) 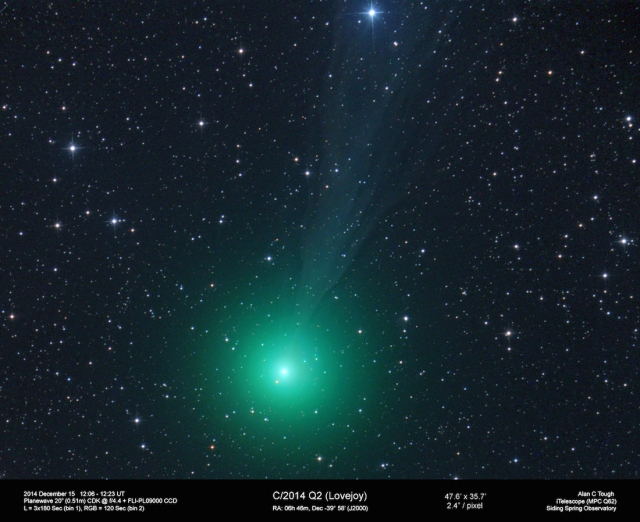 Image Credit & Copyright: Alan Tough.  Look below for Alan’s Flickr & Twitter pages as well as all the data links you will need to find Comet C/2014 Q2 Lovejoy.

If you haven’t been keeping an eye on new long period comet C/2014 Q2 Lovejoy you might want to start!  Currently (as I write this on Dec 29) in the constellation Lepus (The Hare) at the feet of Orion, this comet has reached naked eye visibility at an apparent magnitude of around 6.5 AND it’s quickly brightening.

This comet was discovered on August 17, 2014 by world renowned comet hunter Terry Lovejoy from Brisbane, Australia (That’s why there are so many Lovejoy comets, I think 5 now.) with an 8” inch Schmidt Cassegrain telescope and CCD camera when the comet was a very dim magnitude 14 or 15. Since its discovery, this comet has been brightening quickly and as I said has now reached naked eye visibility.

PROJECTIONS: have it peaking at a pretty bright magnitude 4 sometime during the first week of January.  Its perigee or closest point to Earth should come on January 19 at a distance of about 150 million km or about 98.7 million miles which is further than the distance between the Sun and Earth and its perihelion or closest point to the Sun is expected around January 30 at a distance of 1.3 astronomical units (AU) with 1 AU being the average distance from the Earth to the Sun so as you can see, this bad boy isn’t getting too close.  Also, comet predictions are about as accurate as weather predictions so don’t take predictions as fact, take them as a guideline.

OK, SO WHAT WILL I SEE? One very important thing you need to remember about witnessing events like these is that you will not; even through a telescope see these objects like you see them in this image.  Long exposure photography captures light and details that your eyes can only envy so don’t expect to look up and see a green glow stick in the sky with a streaming tail.  That being said the key to observing comets, as with galaxies, is to know what you’re looking for and exactly where to find them.  Let’s take another small step back because it’s important.

This comet may be naked eye visible at a current apparent magnitude of 6.5 or even as bright as 6 (may even be brighter now) but that’s naked eye visible in very dark conditions so if you live within a half hour or so of a big city binoculars will likely still be needed at the moment. This comet, like most don’t come very close to Earth so you’re not going to have to chase it across the sky in a one night only event.  They’re fast but so far away that movement is slow and they usually remain in the sky as different brightness for months.  If you’re using binoculars look for a green point of light, if you find it, you have found your comet.  You may very well eventually see this comet’s tail with no optical aid at all but it’s unlikely in this case.  With medium sized telescopes, ya you will probably see a tail structure of some sort.

Bottom line, if you want to see a comet, now is your chance so get outside and have a look for it.  Do not wait until the first week of January and peak magnitude to go have your first look because as all of us amateurs know too well THAT week will be nothing but rain.  And don’t worry; if you miss it you will get another chance with this particular comet in 8000 years or so as its orbital period is something in the neighborhood of 11,500 years.  That’s something I have always found interesting.  We hypothesize that comets come from the Oort cloud yet the only evidence (so far) for the Oort cloud is comets that we see in the inner solar system….not the Oort cloud.

WHY ARE COMETS GREEN?  Ya, so what gives comets that beautiful green hue anyway?  It’s actually due to the sublimation of cyanogen (CN) as well as diatomic carbon (C2) in the nucleus of the comet which then interacts with radiation from the Sun.  The result is a glowing green ball similar to neon lights.

3 Responses to LET THE COMET HUNT BEGIN! (If You Haven’t Already)