Here’s my all-time favorite galaxy; NGC 2841.  It can be found in Ursa Major about 46 million light years distant and although there are countless galaxies more exciting, this one has a, sort of, home feel to it.  At only 34,000 light years in diameter, this flocculent spiral galaxy isn’t very large, not even half the size of the Milky Way.  It has very thin, smooth spiral arms that appear to be stable with small, fairly uniform pockets of star formation and nebulae.  Just seems like a great place to raise the kids.  Just so long as you stay away from the ancient yellow nucleus and the supermassive black hole at its core.  Oh, and what’s a “flocculent spiral galaxy” you ask?  In short it’s a galaxy that has many thin small arms vs. the vast grand design two or three arm spirals.

The zoomed in Hubble image below is just amazing to me.  It almost gives you a flyover effect as it almost seems like the leading edge of the galaxy is under you already as you cruise in your Spaceship of the Imagination……..enjoy! 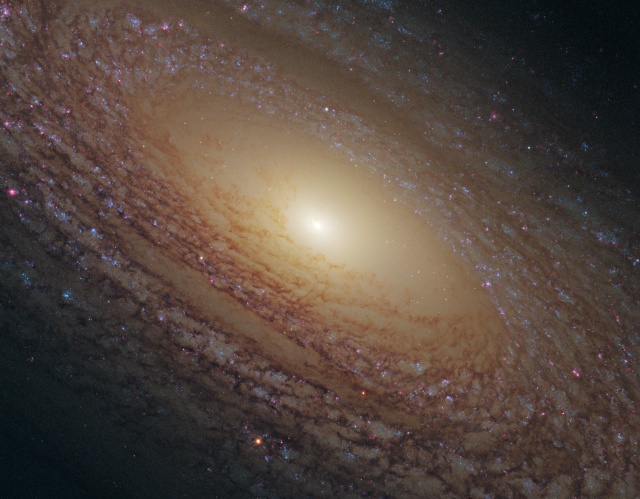 WHAT IS IT?: Flocculent spiral galaxy.

HOW FAR AWAY IS IT?: Roughly 46 million light years.

WHERE IS IT? (General): Constellation Ursa Major (The Great Bear).