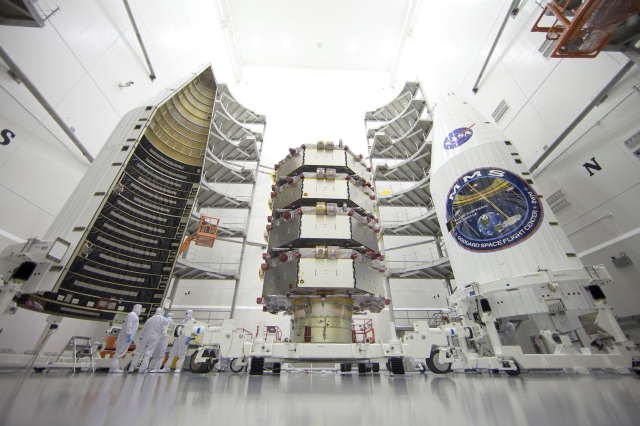 The Magnetospheric Multiscale (MMS) The Magnetospheric Multiscale, or MMS, mission studies the mystery of how magnetic fields around Earth connect and disconnect, explosively releasing energy via a process known as magnetic reconnection. MMS consists of four identical spacecraft that work together to provide the first three-dimensional view of this fundamental process, which occurs throughout the universe.

The United Launch Alliance (ULA) Atlas-5 (V) 500 Series rocket is a two-stage rocket that depending on the size of the fairing used stands between 59.7 m (196 ft.) and 65.5 m (215 ft.) with a diameter of 12.5ft (3.81m) and consists of an Atlas Common Core Booster with a Russian RD-180 engine and first stage with a United States RL-10 Centaur upper stage built by AeroJet-Rocketdyne. The vehicle is available in 6 different configurations which are built specifically for each individual mission. Its launch sites are Cape Canaveral Air Force Station (CCAFS), Launch Complex-41 (LC-41) or Vandenberg Air Force Base, Launch Complex-3 (LC-3). Performance to Geosynchronous Transfer Orbit (GTO) ranges from 8,320 lb. to 19,620 lb. Performance to Low Earth Orbit (LEO) ranges from 17,510 lb. to 40,800 lb.

MAIN PAYLOAD FAIRING (PLF): The Main Payload Fairing for the Atlas-V-421 is a two-shell, 4 m (13.8 ft.) diameter fairing and is used to protect the spacecraft & Centaur during its ascent through atmospheric turbulence and into space. Once safely out of Earth’s atmosphere (Or at least most of it), the fairing is pyrotechnically jettisoned via a debris-free actuating system.

CENTAUR UPPER STAGE: The Centaur Upper stage is 3.1 m (10 ft.) in diameter and 12.7 m (41.6 ft.) in length. It consists of a single Cryogenic RL-10A-4-2 (RL-10) Aerojet Rocketdyne Engine that provides 22,300 lb. of thrust and utilizes liquid hydrogen (LH2) for propellant and liquid oxygen (LOX) as an oxidizer with a burn time of up to 740 seconds to include multiple engine firings. There are also four 27-N (Newton) thrusters and eight 40-N (Newton) thrusters used for attitude control. Both utilize hydrazine as propellant. The Centaur Forward Adapter (CFA) provides structural mountings for vehicle electronics within the spacecraft.

SOLID ROCKET BOOSTERS (SRB’s): Have a diameter of 158 cm (62.2 in) and a length of 20 m (65.6 ft.). The total number of SRB’s utilized is dependent on the individual mission and vary from none at all to 5. They are jettisoned after approximately a minute and a half of flight.

COMMON CORE BOOSTER (CCB) (First-Stage): The American Atlas-V Common Booster Core is 106.5 ft. (32.46 m) in length by 12.5 ft. (3.8 m) in diameter and is powered by a single two-chamber Russian RD-180 engine that utilizes Rocket Propellant-1 (RP-1 or highly purified kerosene) as propellant and Liquid Oxygen (LOX) as the oxidizer. It provides 860,300lb. of thrust at sea level and can burn for 253 seconds. The RD-180 engine is modeled after the 4-chanber RD-170 engines used by the Zenit rocket family.