Tearing at the Heart of it all (Zoom Out) 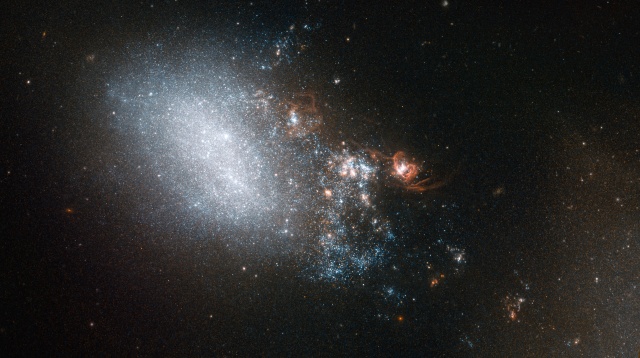 Here’s another amazing image similar in concept to the one we detailed yesterday. The colors in this image are beautiful but they are screaming of destruction on a large scale. To begin, we’re looking at irregular galaxy NGC 4485 about 40 million light years away in the constellation Canes Venatici (The Hunting Dogs) and it’s fallen victim to a selfish lover. A lover who once adored little NGC 4485 for who it was, has change everything about it as it greedily attempted to take ownership of it while passing by. Forcing the one you love to significantly change who they are can only lead to disaster in the end, and that’s just what happened.

I know we’re personifying a force of nature here but it’s a fitting metaphor for what’s taking place. Just off the bottom right hand corner of this image is the much larger NGC 4490 and its gravitational influences have distorted this galaxy greatly. In fact, it’s very likely that this wasn’t even an irregular galaxy to begin with but instead a spiral galaxy. It has undergone that much change since the interactions between the two began. Chaos was the main course for this relationship as they have now passed closest approach (perigalacticon) and are now, predictably, moving apart from one another once again, for good. The disturbance in the local region has spawned massive star formation along the 24,000 light year-long bridge which slightly connects the two.

Taking a step out we now see the two galaxies together. They make up a structure called Arp 269 and like all that reside on the Arp Atlas of Peculiar Objects, they’re a mess. You can see along the length of the larger NGC 4490, that the interaction has set star formation on the fast track here as well. The more I see them the more I think they resemble a whale actually. With little NGC 4485 acting as the tail.

In closing, what an amazing thought it is; gravity. Within it is the power to rip galaxies apart, throw entire stars from their home galaxies and here on Earth, any time you pick something up you’re defeating the gravity of the entire planet. The same planet that’s holding the Moon within its grasp 240,000 miles away……

WHAT IS IT?: Irregular galaxy.

HOW FAR AWAY IS IT?: Roughly 40 million light years.

WHERE IS IT? (General): Constellation Canes Venatici (The Hunting Dogs).

NASA page for this image: http://www.nasa.gov/content/goddard/hubble-sees-starbursts-in-the-wake-of-a-fleeting-romance/