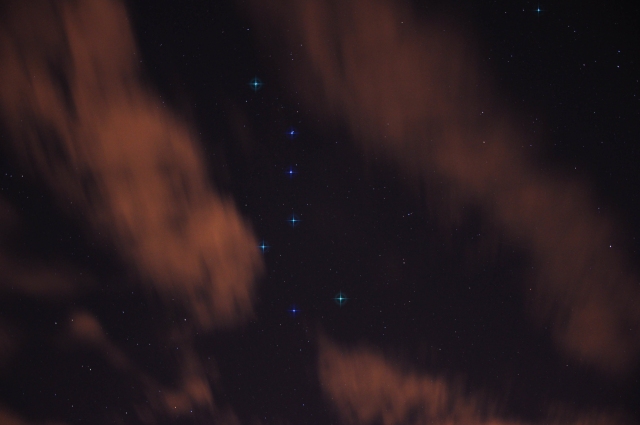 I have been asked from time to time why I don’t show any of my own work very often and the truth is that I don’t have a lot of time and with the lack of dark sky and editing experience I’m just not that great at it.  There are some things I can do from home however, like experiment.

That’s what I’ve done here as I caught the asterism and open star cluster of the Big Dipper through a momentary break in the clouds.  The bright sky rendered the clouds a sort of, cotton candy color and they were moving pretty quick to the longest I could shoot at 14mm for was about 25 seconds (This image is greatly cropped).  I will also add that the bright night sky conditions meant that I was shooting at an ISO of 320 and an F-stop of F3.5.

As far as the editing, I just threw it into Photoshop and made small adjustments and annotated the Dipper stars with distances in the bottom image as well as spiked out the Dipper stars in order to show them off or else the image would be nearly irrelevant.  I created the spikes with StarSpikesPro 3 software which plugs in to Photoshop.

So that’s about it.  That’s why I don’t show off my work much; because there is none.  Well, nothing worth showing off anyway.  If you’re like me you should still shoot your local sky as much as you can and work on editing those images.  They may not me APOD quality but you can become familiar with the camera, settings and software by running through the motions as often as possible.