Launch Alert! Tuesday, November 28 at 05:41 UTC (12:41 EST) a Soyuz 2-1B will lift off from Site-1S at Russia’s new Vostochny Cosmodrome for the second launch in the new site’s history carrying the Russian M2-1 Meteor polar-orbiting satellite as well as a number of secondary payloads. 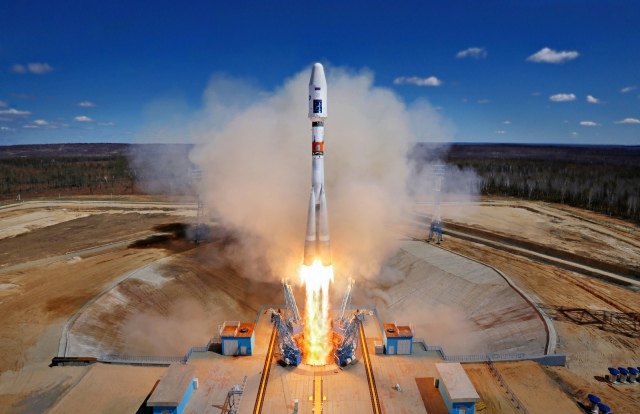 The Vostochny Cosmodrome is set in Amur Oblast, Russia’s Far East near the border of China, about 3,400 mi. (5,500 km) east of Moscow and along the 51st parallel on the site of the former Soviet missile base, Svobodny 18.

This new spaceport is designed to reduce Russia’s dependency on the legendary Baikonur Cosmodrome in Kazakhstan. Vostochny, along with the Plesetsk Cosmodrome (Russia’s “Heartland Cosmodrome”) in Northwestern Russia’s Mirny, Arkhalgelsk Oblast plans to reduce Baikonur’s workload to about 10 percent with roughly 45 percent each going to Vostochny and Plesetsk.

Currently the only pad at full launch status is the Soyuz pad at Site-1S but a handful of others are slated to be constructed on the 23,880 acres (9,663 hectares) to include human rated pads for Soyuz and Angara.

It’s certainly understandable that Russia would desire to limit their dependence on another nation’s land to fly to space as Baikonur is leased to Russia for roughly $115 million annually.  However Baikonur is also a legend and I for one, hope that it’s preserved to some extent as a world heritage site. There is history there like no place else on Earth.

TsSKB-Progress, Soyuz 2-1B (Soyuz ST) Rocket (14A14 or 131KS): The TsSKB-Progress, Soyuz 2-1B rocket is a three stage, medium lift launch vehicle, whose history stretches all the way back to 1957. It stands 46.2 m. (152 ft.) tall with a diameter of 2.95 m (9 ft. 8 in) and 10.3 m. (34 ft.) at its base and currently launches from four different launch sites (Baikonur, Plesetsk, Vostochny and Kourou).  The Soyuz 2-1B is very similar to previous Soyuz family launchers however with its upgraded control system (digital from analog) it has become more flexible than ever while the Soyuz 2 launcher family as a whole will eventually phase out the Soyuz U and FG launchers.

Payload Fairing: Soyuz’s payload fairing is a two-shell protective enclosure 11.4 m (37 f. 5 in.) in length, 4.11 m (13 f. 6 in.) in diameter and protects the spacecraft during launch and the turbulence of ascent before being jettisoned.