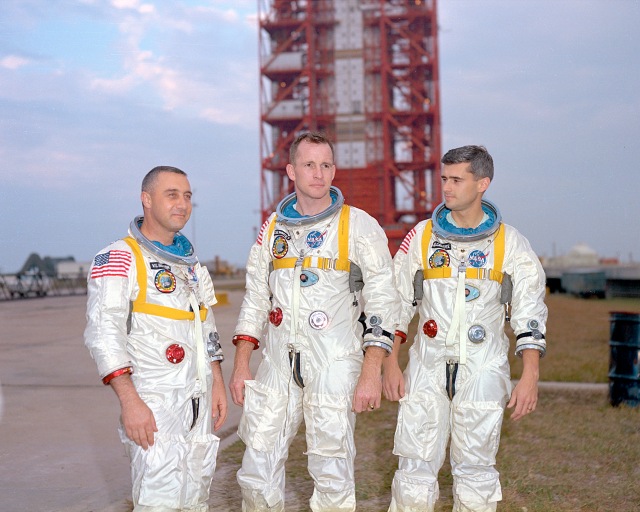 Ad astra per aspera, or as it’s more commonly spoken, per aspera ad astra; “through hardship to the stars.”

Most enter the last week of January as any other. Days begin to grow longer as the chill of winter brings its worst while thoughts of spring begin to thaw in our minds so long as we can dodge a few more winter storms before then. There are many of us however, that view this week in an entirely different light. This is a time that we embark upon a period of remembrance of NASA’s darkest week and terrible loss. A week that, over the course of a couple generations saw 17 Astronauts meet their ends. I will, in the next few days do my best to help us all remember them, how much they meant to the industry, and how much they meant to those of us who remember them every day even though we had never met them.

“If we die, we want people to accept it. We are in a risky business and we hope that if anything happens to us it will not delay the program. The conquest of space is worth the risk of life.” – Virgil “GUS” Grissom after the Gemini 3 mission in 1965.

January 27, 1967 Cape Canaveral, Launch Complex 34 (LC-34). As the three man crew worked through a training exercise high atop the Saturn 1B launch vehicle (SA-204) sealed inside Command Service Module (CSM) CM-012 (AS-204) in preparation of the first crewed mission of the Apollo era, all seemed to be progressing however slowly, toward success. The goal of the test was to prepare the command module for its first manned flight which was scheduled for February 21 of that year. This type of test was known as a “Plugs Out” test, where the crew was fully dressed out and the command module was running completely on its own systems. The test was fraught with minor issues (that’s why they were testing) to include an odd smell in the oxygen lines reported by Grissom as well as astronaut induced air pressure issues with the suits, likely from movement in their seats. Just before the fire, a communication issue cropped up which angered Grissom to the point of saying; “How are we going to get to the Moon if we can’t talk between three buildings?”

What’s most disheartening is that the crew was so concerned with the amount of flammables in the cabin that on August 19, 1966, just a week before delivery of the capsule to Kennedy Space Center they held a meeting with Joseph Shea, then Apollo Project Manager to voice that very concern. Following the meeting, the crew gave Shea a photo of the three of them, hands clasped in prayer over a miniature service module with the inscription; “It isn’t that we don’t trust you, Joe, but this time we’ve decided to go over your head.”

CM-012 was delivered to Kennedy Space Center on August 26, 1966 under a conditional flight worthiness certificate. However even after delivery, six hundred and twenty three engineering change orders had to be made as well as one hundred-thirteen incomplete engineering changes. This wasn’t the first time that the patience of the crew had been tested. Prior to this day Grissom had become so frustrated with the number of changes as well as the lack of ability of the simulator to keep up with those changes, he had actually brought a lemon from a tree at his home and hung it on the simulator to say the craft was a lemon.

At 23:30:54 UTC (18:30:54 EST) during the plugs out test electrical power momentarily failed which likely caused arcing to the interior equipment. The crew first noticed the fire approximately ten seconds later as Chaffee was heard yelling “Hey!” Two seconds later White yelled “Hey, we’ve got a fire in the cockpit!” a few more panicked yet brief transmissions were heard along with the sound of the hull of the spacecraft itself rupturing from the pressure. All transmissions ended only 17 seconds after the first report of fire……The crew of Apollo 1 had been lost.

The fire, as it would be determined, had 3 main causes.

3: Large amounts of flammable material in the cabin. Buzz Aldrin later stated that after the meeting with Shea, he gave the order to have the flammables removed but didn’t oversee the order personally and due to that lack of oversight, they were later placed back in before packaging and shipping to Cape Canaveral.

On April 24, 1967 at the request of the widows, Mission AS-204 was officially changed to Apollo-1 as the three astronauts themselves called the mission.

“You sort of have to put that out of your mind. There’s always a possibility that you can have a catastrophic failure, of course; this can happen on any flight; it can happen on the last one as well as the first one. So, you just plan as best you can to take care of all the eventualities, and you get a well-trained crew and you go fly.” – Virgil “GUS” Grissom.

Through Hardship to the Stars……