Maybe you’ve been on a walk or perhaps driving down the freeway (highway, whatever) and there it is; the Moon sitting on the horizon in an almost shocking display. It appears huge, almost as if for some reason it’s much closer than usual or perhaps Earth’s atmosphere is magnifying the image making it look larger that it normally does.  Either way, it’s beautiful and always a spectacle to see with your own eyes.

So to that point, why is the Moon so much larger when it’s on the horizon than it is when it’s high overhead? Well, that’s the problem; it’s not.  Yea, that’s right, it’s all in our heads and even though we know that it’s an illusion your mind still falls for it every single time, why?  It’s actually closer to you when it’s directly overhead than when it’s on the horizon and the atmosphere isn’t magnifying the image.  If anything, Earth’s atmosphere would reduce the Moon’s appearance somewhat.  The atmosphere will certainly distort the shape and color of the Moon but it doesn’t magnify it. The answer to this problem isn’t firmly known but it more than likely stems from angular illusions like the Ebbinghaus or Ponzo illusions. 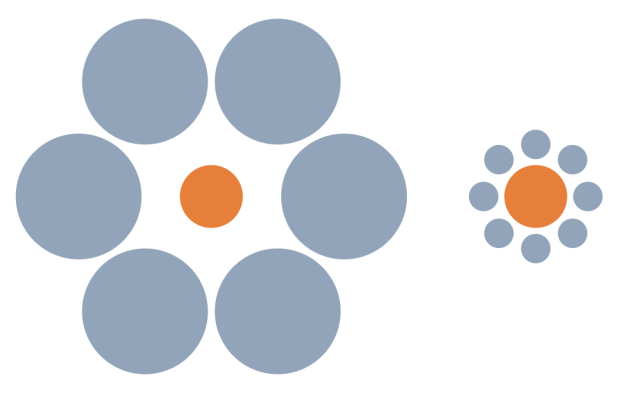 The Ponzo illusion is also pretty common. Created by Italian psychologist, Mario Ponzo in 1911, this illusion uses perspective against you as it depicts two converging lines travelling away from you (as if you were standing on and looking down railroad tracks).  Two identical lines are placed across the “tracks,” one eight in front of you and another off in the distance.  The one off in the distance looks larger because of its size relative to the appearance of the tracks in the distance.

Both of these illusions lend themselves as possible explanations to the moon illusion. As the moon rises or sets, we see it against clouds, homes, buildings trees etc. that are far away.  When the Moon is high in the sky there is no distant reference to compare it to and what little there is are things like houses, trees and clouds that appear much larger than the ones that you saw on the horizon because they’re much closer to you while the size of the Moon in the sky hasn’t changed at all.

I have witnessed this first hand through photography. Much like in the fantastic image above, you can see that the size of the Moon didn’t change at all but had you witnessed it when it was rising, it would have appeared that way to your mind.

Finally, I chose the Moon for this write up because it’s something that you can safely observe but the same effect happens to the Sun and even the constellations as well. Let me know if you’ve ever noticed this phenomenon for yourself.

Detailed article on the illusion: http://www.pnas.org/content/97/1/500.full

Ponzo Illusion with the Moon applied