How Far Away is the Milky Way’s Farthest Star?

The Milky Way, our home star city is a large and fascinating island in the vast expanse of the cosmos. Current estimates show that it’s roughly 100,000 light years-ish in diameter with somewhere in the neighborhood of 100-300 billion stars (which means we don’t know). There is also what’s called the “galactic halo” which extends out to roughly 500,000 light years (153.3 kiloparsecs) from the nucleus in each direction.  In this halo is where most of the Milky Way’s 59 known satellite galaxies and all 157 known globular star clusters reside. Satellite galaxies are large groups of stars orbiting and slowly being consumed by the Milky Way such as the Large and Small Magellanic Clouds. Globular clusters are spherical groups of densely packed ancient stars that were formed around the same time as the Milky Way itself.

In addition to all this, there’s some evidence for a faint set of gamma-ray bubbles extending from each side of the Milky Way’s nucleus to a distance of about 10 kiloparsecs or 32,615.6 light years with a fainter still gamma-ray jet that extends the same distance but at a roughly 80 degree slant. Another way to put that is, if you observed the Milky Way from the side and drew a straight line, the jet would go from roughly the one o’clock position to the 7 o’clock position and extend for roughly ¼ to 1/3 of the diameter of the galaxy. What this alludes to is even though the Milky Way’s 4.5 million solar mass supermassive black hole (Sagittarius A (Sgr A*) is quiet not, this wasn’t always the case.

But wait, there’s more! It’s believed that roughly 88% of the Milky Way’s mass can’t even be detected as it doesn’t exist in the electromagnetic spectrum; it’s hidden away in dark matter. There simply isn’t enough mass in what we can see to explain why the galaxy doesn’t shred itself to pieces as it rotates. Something (dark matter) seems to be holding it all together.

In all this calm chaos, have you ever wondered how far away the farthest stars in the Milky Way are? Well the answer as far as we know it today can be explained with two red giant stars that are cataloged as ULAS J0744+25 (in the constellation Gemini) and ULAS J0015+01 (discovered on July 10, 2014 in the constellation Pisces). These two stars reside a ridiculous 775,000 and 900,000 light years from Earth. 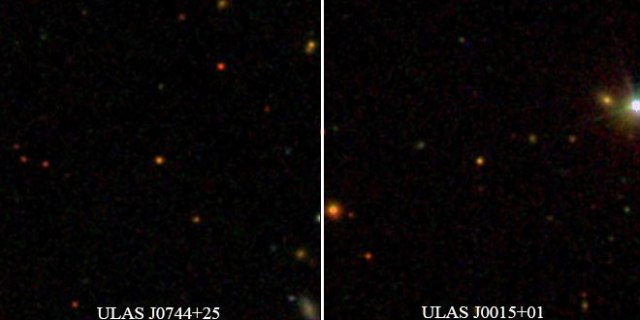 John Bochansky; the discoverer, and his team at Haverford College set out to find the most distant stars by using data from UKIRT Infrared Deep Sky Survey, which uses the United Kingdom Infrared Telescope in Hawaii, as well as the Sloan Digital Sky Survey in New Mexico and taking the furthest 6 million plus stars in the galaxy and slowly sifting through them until they had 404 M-type stars remaining.  From those, two turned out to possess the signature of cool red giants and those findings were then confirmed with spectroscopic data from the 6.5 meter telescope at the Multiple Mirror Telescope Observatory (MMTO) in Arizona.

Collaborator, Beth Willman also of Haverford College explains; “Theory predicts the presence of such an extended stellar halo, formed by the destroyed remains of small dwarf galaxies that merged over the cosmic ages to form the Milky Way itself. The properties of cool red giants in the halo thus preserve the formation history of our Milky Way. These stars are truly ghosts of galaxies past.”

*They’re so far away in fact, that if you lived there the Milky Way wouldn’t look much different than Andromeda in your sky; perhaps larger, that’s about it.

*They’re about one third of the distance to Andromeda Galaxy (M31).

*That’s more than 50 percent farther than any other star ever discovered in the galaxy.

*Prior to this discovery, only seven stars had ever been discovered beyond 400,000 light years away.

*If they orbit at a speed relatively close to the sun’s orbital seed they haven’t even made 2 full orbits as it would take them about 8 billion Earth years to complete one galactic year.  The universe itself is only 13.8 billion years old!

*When those detected photons left those stars, here on Earth, Homo Erectus was honing the new skill of controlled fire, the last magnetic field reversal (Brunhes-Matuyama Reversal) was roughly 100,000 years from taking place and the last eruption of the Yellowstone Caldera (Lava Creek Eruption) was 200,000-ish years from occurring.

*The further of the two stars; ULAS J0015+01 is 33 times further from the galactic core than we are.

*With one star in the direction of Gemini and the other in Pisces, they are more than a million light years away from each other.

Here’s the Sky & Telescope article from John Bochanski himself: http://www.skyandtelescope.com/astronomy-news/the-most-distant-milky-way-stars-070920142/