Launched onboard STS-31 Discovery from KSC LC-39B on April 24, 1990; we are embarking on the legendary Hubble Space Telescope’s 28th birthday week. There may be other important telescopes throughout history but none have been quite as prolific as this one. It has captured our imagination and brought the universe into our homes and hearts now for a generation. Current funding for Hubble runs out in June, 2021 and is expected to be destroyed in Earth’s atmosphere sometime in the late 2020s. In May of 2009 STS-125 Atlantis went to Hubble as part of Hubble Servicing Mission 4 (SM4) and while they were there, an adapter called the Soft Capture Mechanism (SCM) was installed in the event some future mission wished to service it yet again, bring it home or give it one last push but this time, toward its demise. I vote for servicing and eventually capture and return where it can be displayed for generations to come. 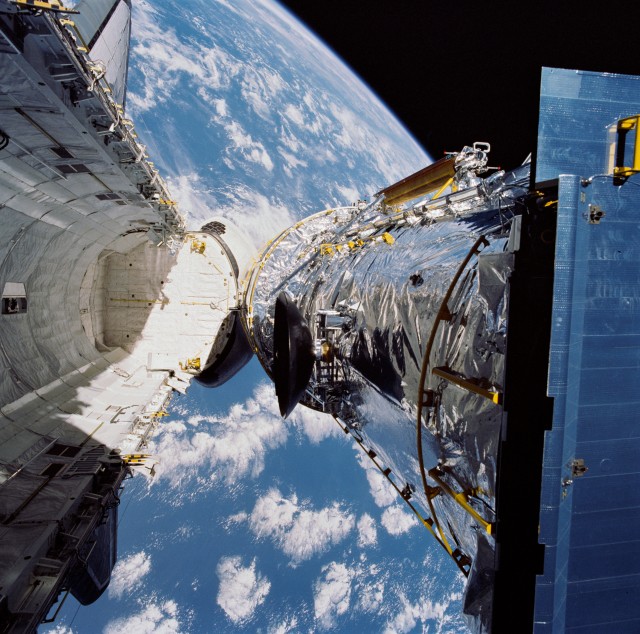 Hubble being removed from STS-31 Discovery’s payload bay for deployment.

Hubble being released from STS-31 Discovery’s payload bay by Canadarm.

Now how about this image of a section of the Lagoon Nebula? The Lagoon Nebula is an emission nebula and HII star forming region that spans roughly 120 by 60 light years in diameter (this image spans a region of about 4 light years) and resides roughly 4,000 light years away in the constellation Sagittarius. Illuminating this ghostly scene is a monster as well. Herschel 36 is a star 32 times more massive, 200,000 times brighter, 8 times hotter and 9 times the diameter of our Sun. Those numbers create a volatile situation as its cosmic winds (radiation) are blasting away at the material that created it only about 1 million years ago. They say if you live fast you may die young and that’s certainly the case for Herschel 36.  Our Sun has a lifespan of about 10 billion years while this fusion reactor only has about 5 million years left. That’s a life expectancy of only 6 million years. 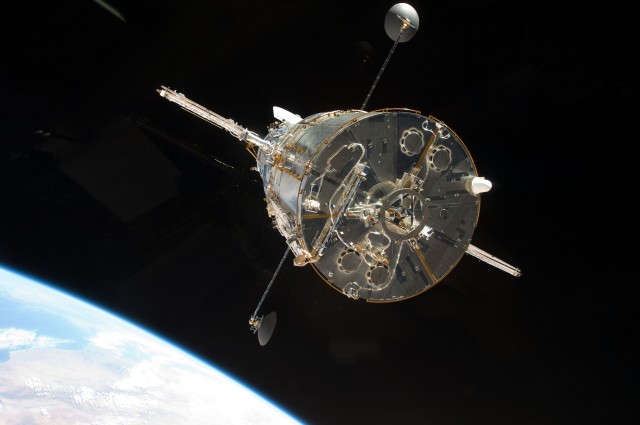 Goodbye Hubble; STS-125 Atlantis releases HST for the final time. The Soft Capture Mechanism (SCM) can be seen at the back of Hubble.

What is it?: Emission nebula and an HII star forming region

How big is it?: Roughly 120 by 60 light years in diameter though this image shows a 4 light year diameter portion

Where is it (general)?: Constellation Sagittarius