Now is the Time to Observe Uranus 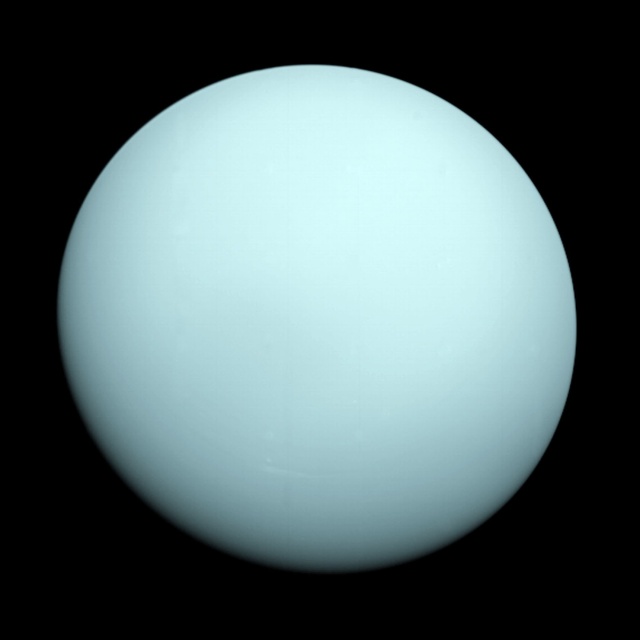 Disclaimer! As much as I want you all to read my entire post and check out the pics and links I want to make something clear from the start. Uranus is so far away (all that info below) that even at opposition it will just barely be naked eye visible. You will need some sort of optical aid to get a decent view of the first ice giant.

Fun Facts: Uranus is the only planet named after a Greek deity. All others are maned after Roman gods. Herschel originally named the planet Georgium Sidus (George’s Star) in honor of King George III. Johann Elert Bode proposed the name Uranus in March of 1782 and the name became universal in 1850 (about 70 years after the planets discovery). Uranus is the only planet other than Venus that doesn’t rotate in a counter clockwise motion but as Venus rotates backward (retrograde), Uranus technically still rotates in a prograde or clockwise motion but it’s on its side so it sort of, “rolls” along its orbit. FYI: Neptune’s moon, Triton orbits (not rotates) Neptune backward (retrograde or counter clockwise). Uranus also has a thin ring system. The moons of Uranus are named after characters from the works of William Shakespeare and Alexander Pope.

Opposition, in planetary terms is when a superior (outer) planet, dwarf planet or planetary body reaches a point almost exactly opposite the Sun from Earth’s vantage point so we see its full, bright disk.  Another way to say it is Earth is positioned directly between the Sun and that object.  This occurs because as the outer planets orbit more slowly than the inner planets so every so often we come up on the inside like turn 1 at Laguna Seca, make the pass and we’re on our way until next time. Though Mercury and Venus can never reach opposition as seen from Earth; Earth reaches opposition as seen from them. Opposition also places the object near its closest point that it can get to the Earth in its orbit (perigee). Technically opposition and the actual closest point usually differ from a few hours to a few weeks.

Why opposition doesn’t also equal perigee or that body’s closest point to Earth?  Well, as I said above it pretty much does but you have to remember that orbits are elliptical and no two orbits mirror each other, so even though a planet may be directly opposite the Sun from us, the elliptical nature of orbits usually means that the actual closest point tend to be slightly before or after opposition.

Also, when applicable, during the immediate hours of opposition look for a phenomenon known as the Seeliger Effect; also known as Opposition Surge, Opposition Effect or Opposition Spike. This is a sudden brightening of the planet (especially Saturn and the Moon) right before through right after opposition. The main culprit for this phenomenon seems to be coherent backscattering and shadow hiding. To use the Moon as an example of shadow hiding; just hours before full moon, the suns light is hitting the lunar surface squarely and almost all major shadows on the lunar surface from our vantage point are gone. When this occurs the Moon can brighten by about 40 percent and usually lasts until a few hours after full phase. When this happens during an opposition of Saturn for example, the rings actually become brighter than the planet itself for those few hours.

Name: Uranus; the Greek god of the sky, father of Cronus (Roman Saturn) and grandfather of Zeus (Roman Jupiter). Uranus is the only planet named after a Greek deity. Herschel originally named the planet Georgium Sidus (George’s Star) in honor of King George III. Johann Elert Bode proposed the name Uranus in March of 1782 and the name became universal in 1850 (about 70 years after the planets discovery)

What is it?: 7th planet from the Sun, one of four Jovian gas giants and first of two ice giants

Distance from the Sun: 20.29 AU on average (an astronomical unit or AU is one Earth Sun distance or about 93 million mi. (149 million km)

Rotational Period (a day on Uranus): Only 17 Earth hours

Satellites (moons): 27 that we know of

Moon Naming System: The moons of Uranus are named after characters from the works of William Shakespeare and Alexander Pope.

Where is it? (constellation): Aries

Apparent Magnitude: 5.7 which will barely visible to the unaided eye (naked eye visibility is about 6 to 6.5 in very dark conditions) in dark conditions

Apparent Size (Angular Size): 3.7” arcseconds and 100% illuminated. For perspective Jupiter is around 44” arcseconds at opposition.

Altitude: It will reach about 75 degrees in altitude

Opposition Frequency: Every 369.6 Earth days or just over one year